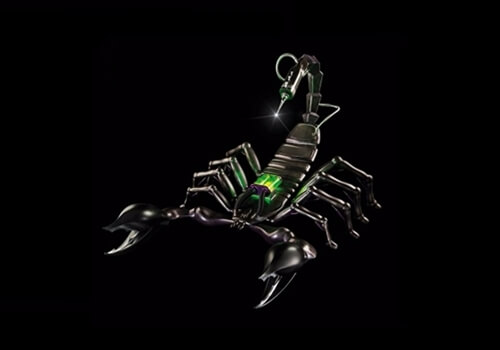 In November 2014 Freeform Technology attended the Advanced Engineering Show at the NEC in Birmingham, and like other companies at the event, we brought along an example of our capabilities, only Freeform decided to do something a little ‘out of the box’.

Deadly Precision was an idea that we came up with 6 months before the event. It took several hours coming up with the final base idea of using the scorpion, with its deadly sting. From there we then decided on how to manufacture the composite creature, working out the structure, strengths and materials to use. After some long nights and unsuccessful attempts we finally cracked the correct measurments and materials for the job.

The scorpion then entered the next stage, creating its CAD. Producing the CAD drawings of the creature took some time, spliting it into each individual part, and deciding on the fixing methods for the legs, tail, etc. but was definately worth it. The use of bolts and fixings were a must to hold each part in the correct position, securing the creature as a solid structure and also to hold the carbon and metallic pincers!

After the designs were finalised and tested, the manufacturing process began. Using our expertise in the CNC manufacturing field we began to machine each peice of the scorpion that was to be made of tooling board, while creating the patterns for the carbon fibre pincers and the aluminium inserts for inside the pincers. The parts, when made, were all passed onto our hand finishing department to be sanded down, removing the machining marks, and to tidy any blemishes from the machining process. Following the detailed finishing procedure the parts were inspected to make sure they were within our own specific 0.1mm tollerence.

During the machining stages of our project we had sourced out the completion of our carbon fibre pincers to CP Composites, who among a few others are in our trusted network of comapnies that we work closely with. They did a brilliant job and produced the pincers to a perfect finish that really gave the scorpion a ‘killer look’.

Finally the scorpion was sent to Rosies Paint Shop and Project 12 Spray Coatings to have the final aesthetical finishes applied, and this really did give the scorpion that ‘Deadly Precision’ we were working for.

The final product was so much more than we were expecting. To finish off the scorpion we had to give it a stand, making sure it made an impression had maximum exposure. The scorpion was placed on a designed podium with illuminated individual perspex stands and a tablet screen to show a video of the complete design, manufacture and construction process.

Please take a look at the short film in our video section of the website, or view the video on our youtube channel.

Want Exclusive Blogging Tips?
Join My Newsletter
Join over 30,000 marketers who get tips on improving their blogging, delivered directly to their inbox.
Give it a try, you can unsubscribe anytime.